This is a sponsored post in partnership with Shout Factory and Fathom Events.  All opinions are mine.

The Boxcar Children-Surprise Island, an all new animated feature, is opening in theaters nationwide on May 8 as part of a special after-school event with Fathom Events, Shout! Kids, and Legacy Classics. The film is based on one of the books from the beloved series by Gertrude Chandler Warner and is family-friendly for all ages, with a recommendation for kids 3-13. 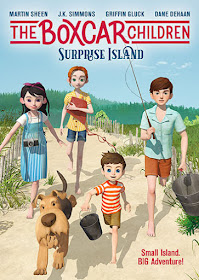 Moviegoers will have an exclusive introduction with actor Griffin Gluck and Director Dan Chuba explaining the process of adapting the book to film, and the process of animating. The film is being released in approximately 700 select U.S. movie theaters.  A complete list of theater locations will be available at Fathomevents.com.

I have fond memories of my son reading The Boxcar Children book series when he was little, and I am looking forward to my daughters reading them as well.   Those who love the books are sure to enjoy this animated film that celebrates the 75th anniversary of the series!

There are 150 books in the series, and over 1 million kids read the books in schools across North America every year. Plus over 70 million books have sold world-wide!

THE BOXCAR CHILDREN - SURPRISE ISLAND follows the adventures of the orphaned Boxcar Children as they spend an entire summer living on their Grandfather’s small, nearly uninhabited island. There they meet Joe, who is friendly and helpful, and inexplicably living on their island. Does their new friend have a secret?


THE BOXCAR CHILDREN - SURPRISE ISLAND is fun for the whole family, and is Dove approved for all ages. It is directed by Dan Chuba and Mark Dippé, and is produced by Legacy Classics and co-produced by Shout! Factory, Albert Whitman & Company and Blueberry Pictures. THE BOXCAR CHILDREN - SURPRISE ISLAND is the first of three new animated features to be adapted from the “The Boxcar Children” book series, as part of a partnership between Shout! Kids and Legacy Classics.

Visit this link to Purchase Tickets to The Boxcar Children movie

One winner will receive a set of 3 books:

This giveaway is not in any way associated with or endorsed by Facebook, Instagram, Pinterest or Twitter. Giveaway Ends 5/4/18 at  11:59 PM EST. US Residents **18 and older** only may enter. One entry per household and IP address. Winner will be drawn using random.org and will have **48 hrs** to respond to email or another winner will be chosen. Entries are verified. No purchase necessary. Void where prohibited by law. The number of eligible entries received determines the odds of winning. The Attic Girl is not responsible/liable for prize delivery. Prizing provided by sponsor. By entering the giveaway, you agree to the Giveaway terms/rules.

Want another chance to win?  Head on over to http://3decades3kids.net/blog/2018/04/giveaway-the-boxcar-children-in-theaters-nationwide-may-8th-fathomevents/

Thanks for dropping by my attic! I love comments! Please keep them family-friendly. By leaving a comment you are consenting to your email being collected for communication purposes only.